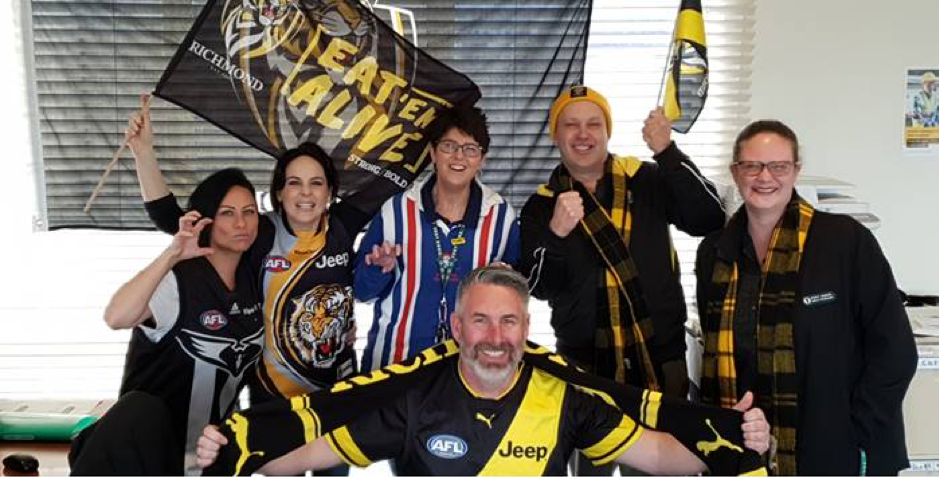 Footy fever is here at Fort Knox Self Storage. Being a Melbourne company there is an added excitement in the air as we celebrate the magical atmosphere of September that for others across our country it may not be as intense. For us Melbournians, AFL or VFL as I knew it was everything growing up. And while we embrace all sports and codes, footy is in our blood. The rivalry is fierce, the hatred for the opposition is a passion in itself, yet on that one day in September, no matter who you support there is an underlying admiration for all players who step out on the hallowed turf of our iconic MCG.

It’s the AFL Grand Final, the one day in the year that “Up there Cazaly” outplays all the number one charts. You can almost smell the aroma of the pies, here the roar of the crowd and feel the build up of the excitement.  As we wait anxiously for the cheer squads to reveal their premiership banners and stand silently for the national anthem and then hear the crowd explode as the siren sounds and the game begins, sends shivers down my spine just thinking about it.

So why is it that this game has such a strong hold on us? I think its because of its unique and raw strength and skill. Footy as we know it is so unlike any other sport. It’s fast and requires extreme endurance of its players. The physical contact, the strength and durability are incomparable. But most of all I think it’s the camaraderie of the team that make it so intriguing. As spectators we emotionally attach ourselves to the good and bad play. We emerge ourselves in the teams like a massive extended bench on the sidelines, everyone is an expert. We cheer, we laugh, we scream, and we cry, for we get so involved that every missed opportunity affects personally. And for those who make it to the preliminary finals to just miss out or to play in the grand final and lose, well that can only be likened to having your heart totally broken, seriously it is sole destroying. I know for those of you reading this whom aren’t lovers of footy your may not be able to resonate with the real raw emotions but like I said its in our blood and it affects us deeply.

And then there are those whom are lucky enough to have their team walk out onto the MCG and take home the trophy! Well that is as exciting and exhilarating as winning the lottery. The joy and happiness cannot be put into words.

As we build up for what can only be described as epic opportunity for both the Richmond Football Club and Greater Western Sydney Giants the team here at Fort Knox Self Storage are celebrating all our supported clubs. As while it is an unwritten law to ever support an opposition team there is a mutual understanding for all supporters to get behind one of these two awesome teams for the day. And personal bias aside it would be un-Victorian of us to support GWS so our deepest apologies in advance however, as an original VFL club and as a proud Melbourne born and bred company, we will be getting behind the mighty Tigers this weekend, in true Victorian spirit.

Seriously, all Banter aside, we truly want to congratulate both clubs and all players for making it thus far. To be in the grand final is a tremendous accolade so hats off to you all and we wish both sides a good fair game with no injuries. May the best team win…………. Use our FREE VAN to load up your new storage unit!